Settlement was obtained for a client who was rear-ended on the interstate by a tractor trailer, and suffered spinal and head injuries. In addition to recovering for the client’s injuries, Will Owens and Kimberly Miller sought to recover additional/punitive damages based on the trucking company’s alleged negligent hiring and retention of a driver who was not physically qualified to operate a commercial motor vehicle. To accomplish this feat, the firm used its nationally recognized experts in the fields of accident reconstruction, trucking industry standards of care, life care planning, and forensic psychology. The firm secured the sworn testimony of 7 witnesses who were at the scene of the wreck. Will Owens traveled to Georgia and Texas to take depositions of the trucking company representatives, including the safety director and CEO.

The case was litigated in Federal Court in the Middle District of North Carolina. The case was featured in Lawyer’s Weekly Magazine. (View PDF) In addition to the original article on the case, on Feb. 13, 2017, N.C. Lawyer’s Weekly listed this case in their annual list of the largest settlements/verdicts in the entire State for the year. This was the second consecutive year the magazine listed an O&M cases as one of the largest in the State for the year. (See 2015 below.) 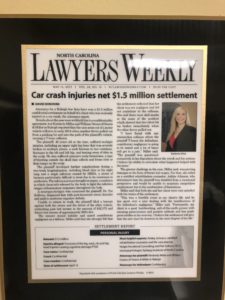 The action arose out of motor vehicle collision that occurred when the Defendant pulled out in front of the client’s vehicle causing a T-bone collision. Attorneys Kimberly Miller and Will Owens filed a lawsuit against both the owner and driver of the vehicle Defendant was operating in order to get to their insurance coverage. In their response to the lawsuit, the insurance company insisted that the client was partially at fault in causing the wreck and should therefore receive no recovery under NC’s Doctrine of Contributory Negligence.

Settlement was reached after depositions were taken in the case and after Owens & Miller hired a Vocational Rehabilitation Expert who opined on their client’s ongoing disability from the collision and gave a life care plan. The case was featured in Lawyer’s Weekly Magazine (View PDF) . In addition to the original article on the case, on Feb. 13, 2016, N.C. Lawyer’s Weekly listed this case in their annual list of the largest settlements/verdicts in the entire State for the year.

In 2012, Owens & Miller obtained a judgment in a wrongful death lawsuit on behalf of a family who lost their loved one in a tragic car wreck. The at-fault driver provided false insurance information to the investigating officers. Almost immediately, the driver moved out of state in an effort to avoid conviction on the criminal charge of misdemeanor death by motor vehicle.

In addition, both the driver and the owner refused to provide insurance information to authorities. Owens & Miller filed a lawsuit in an effort to find justice for the family.

Ultimately, the Firm was successful in obtaining a judgement on behalf of the client’s Estate for an amount in excess of $2 million dollars

In 2013, Owens & Miller obtained this 7 figure judgment on behalf of a family who lost their loved one in a tragic boating accident. The at-fault operator of the boat was operating their boat carelessly and their actions had fatal results. The wrongful death lawsuit was litigated in State Court in South Central NC.

In 2019, Owens & Miller obtained this 7 figure recovery (in worker’s compensation benefits and 3rd party auto liability insurance proceeds) for a client who was seriously injured (amputation) in a wreck while in the course and scope of the client’s employment.

After a unique legal issue involved with the case was vigorously litigated, and after O&M’s client prevailed on this issue, the third party claim was settled prior to a jury trial.

In 2009, Will Owens obtained this Judgment in a wrongful death lawsuit for the family of a client who tragically lost her life in a car wreck. She was driving through an intersection with a green light, when the at-fault driver ran a red light and caused the collision.

The at-fault driver did not have insurance on the vehicle; so this was litigated as an “uninsured motorist claim” against our client’s own insurance company. Owens filed a lawsuit and litigated the matter in Durham County where he obtained the seven figure judgment and recovered all available insurance proceeds.

In 2019, Will Owens & Kimberly Miller obtained a jury verdict for $650,000.00 in Wake County for a client who was seriously injured in a motorcycle wreck. Before the firm’s involvement, the client had been offered only $100,000.00.

The firm retained the appropriate experts and conducted a mock trial/jury focus group to assess the planned approach to various issues within the case. After the Court added interest and costs to the firm’s jury verdict, the total recovery was over $800,000.00.

While walking through a store parking lot, our client was struck by a drunk driver, and suffered serious injuries. The insurance company for the drunk driver denied the claim based on their position that the injured person contributed to their injuries by walking in the “public vehicular area” and should therefore receive no recovery under NC’s Doctrine of Contributory Negligence.

Owens & Miller filed a lawsuit in Durham County, alleging that 1) our client was not “contributorily negligent” in the first place, and 2) even if she was, that contributory negligence is outweighed by the drunk driver’s “gross negligence” and “willful & wanton” conduct in driving while impaired. The Court entered the $750,000.00 judgment in 2013.

Kimberly Miller’s client was struck in an intersection when a dump truck ran the red light and smashed into his vehicle. Her client suffered a TBI and multiple broken bones.

O&M’s client was driving down a 2 lane country road when another driver crossed the center line and struck the client head-on. The client suffered serious injuries resulting in numerous surgeries.

When the insurance company for the other driver failed to offer a fair settlement, Owens & Miller filed a lawsuit in Alamance County. Midway through the actual jury trial in 2013; after the presentation of evidence, but before the jury began deliberations, the case was settled.

Kimberly Miller represented a gentleman whom was injured in a wreck and suffered post concussive symptoms. Kimberly was able to recover for him all of the available coverage in the case.

In 2012, Owens & Miller represented the Estate of an out of state couple who were killed while driving on I-95 in North Carolina on their way to their temporary residence in Florida. Unfortunately, there was a limited amount of coverage for the judgment proof, elderly driver. O&M was successful in recovering all of the available limits under the deceased couple’s UIM policies.

In 2013, Owens & Miller resolved a trip and fall claim for a client against a retail store that had to be litigated in Federal Court due to the denial of liability by the Store’s insurance company.

After numerous depositions were taken by premise liability experts, a settlement was reached in the amount of $250,000.

In 2019, a settlement of $250,000 was obtained for a client who injured her shoulder in a wreck which occurred in a parking lot.

The insurance company argued that the low speeds of the vehicle should minimize the injury and the financial recovery. The firm was able to overcome this issue with the medical evidence available within the client’s medical records.

A settlement for the insurance policy limits was recovered for the estate of a deceased client was reached after the firm litigated a coverage dispute dealing with the dual residency of a deceased spouse of the insured and unfair and deceptive trade practices on the behalf of the UIM carrier.

This settlement of a personal injury claim was reached for an injured party who suffered a concussion/ mild brain injury when riding as a passenger in a single car collision.

When the insurance company for the driver of the client’s vehicle disputed the severity of the O&M’s client’s head injury, O&M arranged for an independent neuropsychological exam by a well-respected neuropsychologist in the area to bolster the case. The matter was resolved shortly thereafter. Durham County 2013

Settlement of an auto wreck case for a client who injured his knee in a head on collision.

Kimberly Miller’s first jury trial was in Cumberland County, NC wherein she represented an auto accident client who suffered a sprain and strain (whiplash) to her neck and back.

State Farm Insurance denied liability on the case arguing the client’s contributory negligence was a bar to recovery. No offers of settlement were ever made by State Farm before or during the trial. State Farm’s lawyer argued to the jury that the client was contributorily negligent and should be awarded $0.00.

Kimberly argued to the jury that her client was not contributorily negligent and asked the jury to award $15,000.00 in damages. The jury agreed with Kimberly and awarded her client $20,400.00.

Though she’s had larger financial victories over the years since this case, Kimberly is still very proud of the work done on this hard fought case for the deserving client.

Disclaimer Concerning Case Results
The cases listed here do not represent the lawyers’ entire record. Of course, we are not successful in every case we handle. Each client’s case is unique and must be evaluated on its own merits. The outcome of a particular case cannot be predicated upon a lawyer’s or a law firm’s past results. These matters, as with most cases, involve complex facts that require application to an increasingly complex set of State and Federal laws. These case results listed simply represent some of the matters where Attorneys William Owens and/or Kimberly Miller were successful in obtaining the listed judgments, verdicts, or settlements for a client in excess of $225K. These case summaries represent just some of the injury/death cases we have handled over the course of the last decade North Carolina.

No Recovery, No Fee.
We handle personal injury cases in Wake County and surrounding counties of central and eastern North Carolina. Call 919-719-2750, or contact us about your situation.